Plus what you need to know about the virtual event on June 5 in celebration of her first capsule collection for the iconic sportswear brand.

This past March, Melody Ehsani — the Los Angeles-based entrepreneur and founder of the streetwear brand ME. — was named the first creative director of women’s business at Foot Locker. The announcement not only heralded the inclusion of women’s perspectives in sport and sportswear as an increasingly powerful force; it also highlights crucial mainstream support for Ehsani’s visionary outlook when it comes to intertwining design and activism.

Granted, this notion has become quite buzzy over the last year in particular. But when you consider that Ehsani, who launched her line in the mid-2000s, has embraced this ethos from the very start, you see a greater picture of what she’s accomplished and where she’s heading.

“I grew up always being obsessed with pop culture, and congruently also having a real passion for justice and being able to give a voice to the voiceless and disenfranchised folks,” Ehsani says. “I’m a first-generation child to immigrant parents, so I saw a lot of what they had to deal with firsthand, and that inspired me from a young age.”

Ehsani notes, though, that her entrée into a creative field wasn’t nurtured as early. “Growing up in a traditional Persian family, you kind of only see [a few] options for what you’re going to do professionally — it was like okay, I’m either going to become a doctor or a lawyer or a pharmacist,” she laughs. “[My parents] were both artists but never made any money off their art so I viewed it as something very impractical and secondary. It was always a hobby — it wasn’t really assigned value in terms of making a living.”

And so, Ehsani went to college and studied sociology and philosophy in her undergrad, subsequently enrolling in law school. “My uncle told me to take as many internships as I could,” she recalls. “I did a million law internships and was left completely disenchanted by the field and the process.” Ehsani decided to drop her enrolment. “I couldn’t move forward with law because I felt like I would be miserable, and waking up to something every day that I didn’t love,” she says. “Love was always really important to me.”

After booking an appointment with medical intuitive Julie Burns Walker, Ehsani’s fate essentially became sealed. “It was the first time that somebody had ever seen me for what I was as opposed to what was projected on me of what I should be,” she says of the conversation. “A lot of that was design-oriented. After receiving that mirroring, so to speak, I just followed that path and never looked back.”

Indeed, Ehsani only seems interested in moving forward, and it’s evidenced by each project she embarks on, whether it’s the podcast The Butterfly Forecast — which she launched earlier this year with Burns Walker and examines “how the smallest changes made by an individual can change the outcome for the collective” — or her new role with Foot Locker.

Her first capsule collection for the brand will launch on June 10, and is inspired by another big love in her life, basketball. It features an assortment of shapewear and athletic pieces including an organza tracksuit that was developed with Ehsani’s close friends — Toronto-raised, Bombay-based creatives Mriga Kapadiya and Amrit Kumar of the brand NorBlack NorWhite. “Sharing the platform with them was probably my favourite part of this experience,” Ehsani notes. 70 percent of the debut collection is gender-neutral in design, and sizes range from XS to 2X; Canadians can find it online and at the brand’s Toronto and Vancouver stores. 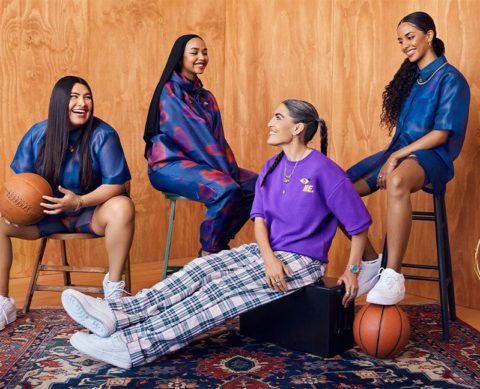 To introduce the line, Ehsani and Foot Locker have crafted a virtual event called The No More Next Festival which will run on Saturday, June 5. The day’s programming includes a Q&A with Ehsani, as well as an affirmation session and a roundtable she will participate in alongside streetwear designer Don C. and Renee Montgomery, owner of the basketball team the Atlanta Dream.

“She’s the first woman to own a WNBA team and the first former player to own a WNBA team,” Ehsani enthuses, adding that it was important for her to include such perspectives as Montgomery’s during the online event in an effort to engage with them outside their typical context of the sports world.

“A lot of events, especially when they’re corporate events, seem to have the same sort of talking heads talking about the same things,” Ehsani says. “I wanted [us] to talk about the world that we’re inspired by and exploring and delving into from a justice standpoint and a fashion standpoint — bringing people into a room that I don’t know if you’d necessarily see talking to one another, and whose opinions you might not know, or even people you might not know of.”

The event’s mandate is unsurprising given Ehsani’s general lens on life. “My mission has always been to elevate consciousness,” she says of her approach to running a business, as well as her personal philosophy. “It’s the pillar that’s always been at the core of my brand [and] it’s what I’m inspired by — when you phrase something differently [about] a particular experience for a group of people. What does it do to you, and how do you feel about it, and how do you get involved. For me it’s never been about a new look in fashion, it’s been about a new voice.” 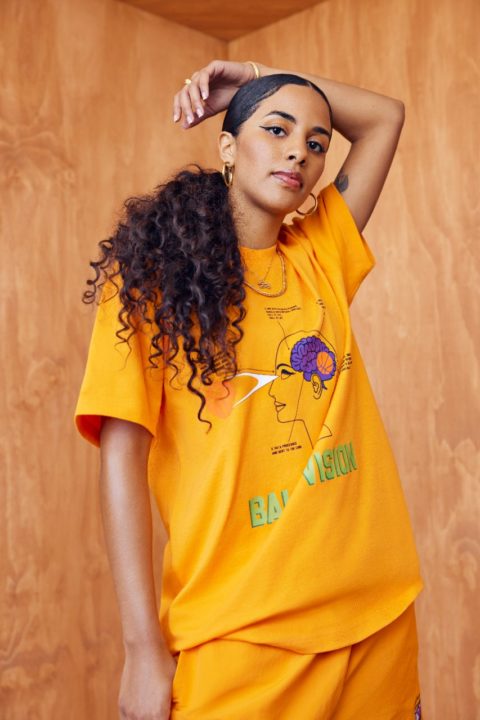 She goes on to highlight that she thinks it’s “an exciting time because it’s a time of germination. You have people like Kanye [West] — I just went into a deep dive with what he’s doing and it’s really impressive. He’s manufacturing some of his own footwear in the U.S. which is sort of unheard of, and he’s committed to being completely sustainable in the next five years which means dealing with the issue of dyes and the toxicity of them, which is really hard. I see a lot of people that are in my age group are making these huge strides and not being scared of dreaming bigger. I also think there’s going to be a renaissance of young people doing their own thing. Little movements of people taking things into their own hands [and] getting back to innovation and moving away from the materialism and consumerism of it all.”

Ehsani notes, however, that the style world in particular is also at a juncture where “you can’t just make the jump from fashion to activism without having consciousness in the centre of it. It’s become a bit trendy, and people are now being held to account in terms of what their company stands for, where’s the money going, and who’s sitting in the board room.”

For this reason as well, Ehsani’s role at Foot Locker is a momentous one. What would she say to her younger self, all things considered? “I think I had so much doubt along the way about what I was actually capable of,” she says. “I’ve become so much more free, and I’m just finding more and more freedom in terms of being able to question things. Like, why can’t I do something? I feel you like you actually can do whatever it is that you want to do, but there are so many forces in the world that try to make us feel like we can’t, or we’re not good enough or we shouldn’t. Surround yourself with people who see you and make you feel like you can.”

Yet Ehsani recognizes that the evolution from self-doubter to boundary-breaking enlightened being is “a never-ending process.” She credits a “strong spiritual practice,” as well as a self-care routine that includes myriad vitamins and supplements to support her emotional well-being and brain chemistry, with fortifying herself along the way.

“Having a relationship to my creator, and humbling myself every day as to how small I am in the grand scheme of things and that I can only do what I feel like I’m here to do,” she says of what keeps her going. “My spiritual upkeep is really important because it reminds me of my design as a human, and what I’m designed to do here.”

Simone Biles' fans are finally getting to see her one and only rotation at the gymnastics team final of the Tokyo Olympics. Biles competed in just one rotation, on vault, before walking off the floor due to a "medical issue," USA Gymnastics...

Still, there is real-world evidence that mandates work.Dr. Offit said Mississippi, which has one of the nation’s lowest coronavirus vaccination rates, has extraordinarily high rates of childhood immunization because its state law does not allow philosophical or religious exemptions.When a...

Shoreline.io automates fixes that range from one-line commands to remediation loops. Image: Ashalatha/Shutterstock Fix once, automate the solution and then deploy many times. That's the philosophy behind Shoreline.io, a company that aims to make life easier for site reliability engineers. ...

Everything to Know About the Megan Thee Stallion x Revlon Collection

Photography via instagram.com/theestallion Hot Girl Summer, coming right up. By Souzan Michael Galway Date July 27, 2021 If the never-ending rain and humidity have made it hard for you to have a hot girl summer this year, help is on...