Meet the Founder of Non Denim, the Label That’s “Conscious by Design”

Pete Hellyer launched Non with the ambition of making change in the denim space. Here’s what you need to know about the new London-based line.

Like many of us over the past year, Pete Hellyer — founder of Non, a denim-centric label based in London — has been searching for meaning. With 15 years of experience in the e-commerce and digital realms of the fashion industry, he found his client-based work was becoming more sporadic as the pandemic’s hold intensified. “I had a lot of free time, and there was a lot of uncertainty,” says Hellyer, who had worked as creative director for businesses including Ssense and The Outnet before going freelance.

To bring a little cheer into his life, Hellyer — who, again like many of us, found himself primarily wearing loungewear throughout lockdown — decide to treat himself to a pair of jeans. “I live in denim,” he notes of his typical attire. “I’m one of those people with a uniform [of] a white tee and jeans.”

Finding a pair with satisfying style, sustainability and ethical production credentials proved difficult for Hellyer, but the process sparked an idea. “I thought, I’ve got a lot of time on my hands — I’ll make some.” Initially predicting that he could produce a small run of jeans that were both ethically made and environmentally friendly, the more Hellyer researched and investigated materials and manufacturing, the more he realized he’d have to augment his scope to turn his idea into a reality. “Making 100 pairs wasn’t possible” with the minimums that exist in the textile industry, he says. And so, Non was born.

“I had no intention to launch a fashion brand, and I don’t identify as a fashion designer,” Hellyer notes, describing the origins of his line as a “happy accident.” The name speaks to Non’s lack of logo and branded elements, as well as the fact that the pieces are non-gendered and its production endeavours to be non-wasteful. And unofficially, it’s an acronym for the idea of “Now or never” — a prescient provocation given the perpetually tumultuous times we live in.

“What I’ve really enjoyed is that it’s given me a sense of purpose,” says Hellyer of how it’s felt to dive into this new endeavour that has such a timely mandate. “It’s a mission I really buy into and believe in, which I haven’t maybe always had in my work. In the fashion industry, there’s not always purpose behind everything that we do.”

Despite its admirable ambitions, Hellyer is hesitant to describe Non as “sustainable,” instead bestowing it with the ethos of “Conscious by Design.” The label’s range of selvedge denim pieces, which include a variety of jean styles, jackets and accessories, are made in Turkey by Isko, a mill that pays workers a living wage and is a bluesign® SYSTEM partner (meaning it adheres to strict and safe production protocols that have an environmentally-sound focus). 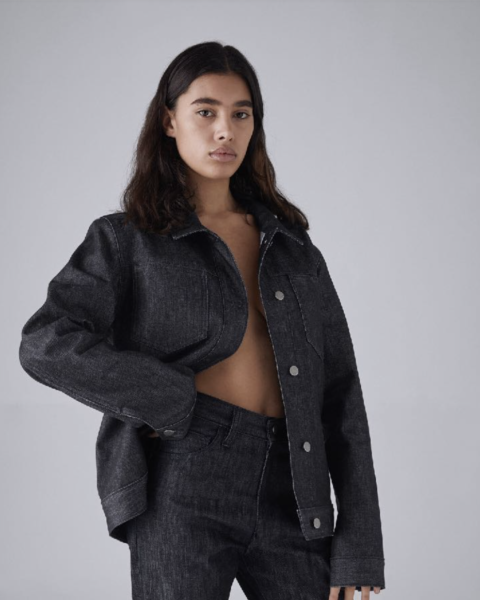 “I wanted to push every element as far as we could,” Hellyer notes of the brand’s use of vegan organic and recycled materials, as well as its unisex design philosophy. Non also offers a take-back program for its wares, meaning customers can send in old items, which are donated or recycled, and receive a discount their next order.

Additionally, Hellyer strives to give Non’s garments an innate versatility (i.e. you can wear them either fitted or oversized) that lends to longevity. “If you have a jacket that you can wear multiple ways, it’s like having four jackets,” he says of how he envisions design practices enabling customers to adopt better consumption habits going forward. “And it’s important that [these] are items that don’t age.”

While Non’s styles might have an aesthetically timeless quality, they also possess a decidedly modern aspect: The inclusion of a scannable NFC tag that allows consumers to glean garment care instructions and information about the piece’s provenance. This clever bit of tech, created by Non partner Eon, also affords future recyclers a breakdown of data to “improve end-of-life management” of the item, according to the brand’s website.

“I’ve always wrestled with working in fashion to some extent,” Hellyer says about why he’s taken such measures with his fledgling label. “I’m a huge advocate of personal style and self-expression and individuality; but inherently, being a sustainable brand in the fashion industry is a problem because the philosophy of the industry is the problem. The very definition of it is based on redundancy — the fact that something is extremely sought after and then not desired six months later.” 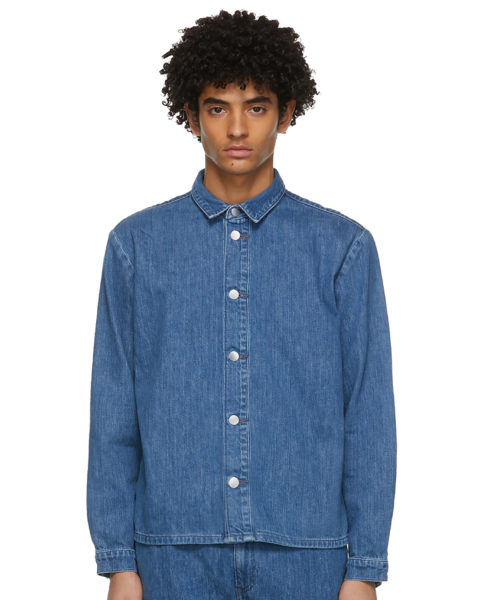 In grappling with the complexities of want, need and waste, Hellyer has opted to take an approach with Non that centres around transparency instead of preaching to or inundating interested customers with pie charts and often mystifying certifications. “I think that’s why greenwashing is sadly so effective,” he says about how insider and intellectualized much of the discussion around “sustainable fashion” has become. Hellyer describes the information presented on Non’s website as “warts and all,” indicating that there’s still more he wants to improve on within its production framework. And it reflects the paradoxical nature of sustainability in the fashion world.

Hellyer highlights how the current landscape leaves little margin for improvement as so many aspects of it are treated as binary issues, and that the acknowledgement of who gets to be a “conscious consumer” is also desperately lacking. “You have people who have money to play dress up and can afford to wear ethically-made products,” he says. “[But] it’s hard to deny someone who doesn’t have the disposable income the same sort of pleasure or self-expression because they can only afford clothes that are unfortunately made less ethically.”

For his part, Hellyer hopes that the strides he and other like-minded brands are making will influence and inspire more mass businesses, meaning that ultimately, every consumer can make better calls when it comes to clothing and accessory purchases. “It’s exciting that things are moving quicker in certain directions,” he says of the gaining groundswell of biomaterial research, considered production practices and mounting circularity in the style space. Yet as he so rightly continues, inclusivity must be part of the equation to truly make these gestures meaningful.

“If we can be part of that conversation and show processes and materials that help make a change in bigger brands and wider parts of the industry, that’s going to have a greater impact than if I make a thousand pairs of jeans really ethically and sustainably,” he notes. “That’s not going to change the world.”

What time does WrestleMania 37 start today? TV schedule to watch WWE on Night 1 and Night 2

WrestleMania 37 is just too big for one night. WWE likes to do things bigger, louder and more obnoxiously than anyone else, so it's no surprise that last year's WrestleMania was the first of — presumably — a new wave...

A Teacher Marched to the Capitol. When She Got Home, the Fight Began.

Kristine Hostetter was a beloved fourth-grade teacher. Then came the pandemic, the election and the Jan. 6 riot in Washington. Did you like this article? You can read it and many others @ NY Times!

Why Prince Charles and Prince Philip’s Relationship Was So Complicated

Charles first laid eyes on 16-year-old Lady Diana Spencer in 1978 when he was invited to Althorp, her family's estate, by one of his paramours, her older sister Lady Sarah Spencer. At his 30th birthday party, held at Buckingham Palace,...

Lionel Messi should follow his heart and stay with Barcelona this summer in a bid to restore the Blaugrana to their former glories, according to his former Argentina team-mate Franco Di Santo. Speculation around Messi's future continues to swirl, with...

“The last thing we wanted to hear about was we’re getting less vaccines,” Gov. Larry Hogan of Maryland, a Republican, told reporters Friday. “We were hoping to ramp up as they’ve been promising.”In a statement, Gov. Andrew M. Cuomo of...